The first element which I will cover – which is crucial for the resulting sound – is the material the organ pipes are made of. Up until the last quarter of the 13th century, copper was preferred as the material for the pipes. Sources indicate that copper was used mostly without mixing with other metals and that it was appreciated for producing a sharp, loud sound.

The proportions of the pipes, which are also decisive in the resulting sound, are the most complex element to reconstruct. There are several medieval manuscripts that describe various ways to use proportions in organ pipes. Those sources are known among musicologists as Mensura fistularum (stay tuned for a coming article on this topic). Some of the information there, though, is theoretical or speculative in nature and not meant to be followed as a guideline for practical reconstruction.

What is missing in these sources is information about the exact size of the pipes, since measurements are given through proportions. In this reconstruction we followed the medieval treatises: where we didn’t have detailed documented information, we experimented. There were multiple possibilities so we had to make a choice. During experiments with pipe making, a variety of colours progressively showed up along the range from the lowest note to the highest. We believe that by having a non-homogeneous colour for the whole organ range it does approximate to the medieval conception of sound as described in the medieval sources.

The reconstructed organ has two drone pipes (G3/D4) besides the pipes for the diatonic scale. The drone is a pipe which holds a tone independently of what is played on the keyboard. Drones were a common characteristic in several 13th century instruments, organs of the time being shown with one or more drones. Harps had a string referred to as drone that is played repeatedly while playing melodic lines. In the case of the vielle the drone sounded continuously because the bow played at least two strings at the same time (due to the bridge being relatively flat): one or more of the strings sounded as a drone while the melody was played on the other string.
In performance, a drone makes a continuous sound and maintains it throughout a piece or section of music. This type of drone has nothing to do with what we call later “pedal”, since at that time the concept of harmony (based on a succession of chords) wasn’t yet developed.

The musical repertory of the 13th century is substantially diatonic, with frequent use of Bb and occasional appearances of F#. The ambitus of this reconstruction – which corresponds to that of the female voice – is only one option among many; other ambitus options are possible. In this reconstruction, the range of the instrument is B3 to A5. For practical reasons I chose to have an instrument suitable for playing with other instruments at 440HZ or thereabouts, since the ensembles with whom I play have agreed on this pitch standard and their instruments are built correspondingly. In fact the sources do not indicate the pitch at which instruments were tuned in the 13th century; therefore the choice of pitch standard is merely a convention in order to establish a consensus for ensemble playing.

The keyboard consists of a fourteen-note diatonic scale plus two F#s and one B-b. It is made with buttons, the most common system at this period. The whole instrument is assembled without recourse to modern technology; no screws or materials such as steel or plastic were used in its construction; traditional wood joining techniques were employed and the glue used was made by following recipes from the period.

I tune this instrument using Pythagorean tuning – the most suitable tuning system for the repertories of the 13th century. The Pythagorean proportions are described in medieval treatises and are often hypothetically demonstrated through numeral ratios on monochords, bells and organ-pipes (in a forthcoming article, I will discuss in more detail why it doesn’t work with all of them). In fact, when teaching Pythagorean tuning I use this instrument, which is of great help to students for practising tuning intervals with Pythagorean ratios. Because of this pedagogic support I have named my organ “Pythagoras”.

One of the hardest challenges was to reconstruct the bellow. Here I should give special thanks to Walter Chinaglia, historical organ maker from Como (Italy), who built my instrument and also helped with his ideas throughout the planning and reconstruction process (you can visit his website to know more about this reconstruction and other reconstructions of historical organs). In the iconography, the bellow usually appears underneath the instrument in a semicircle or semi-oval shape. The hand that actions the bellow can be seen pressing the bellow from under the instrument. This sort of position of the bellow is also found in 14th century sources. In many depictions, players stand while playing and some of them show a strap from the shoulder where the instrument hangs. Despite the fact that the bellow appears to be small, it actually has a similar capacity to human lungs, so the maximum duration of sound produced in one “breath” is equal to that possible with the human voice.

The reconstruction of this instrument has allowed me to explore 13th century music and to develop a sense of the sound aesthetic of 13th century organs. There are three main observations that I would like to highlight: 1) the use of copper and the way the pipes are crafted results in a powerful sound full of harmonics that blends astonishingly well with voices and other instrument reconstructions of the 13th century when performing repertory of the time; 2) the experiments we conducted with the pipe proportions resulted in various timbres that correspond to different registers of the human voice as described in medieval sources; 3) playing by standing and holding a very light instrument – only 4 kilos – allows the performer to reconstruct medieval performance practices such as processions and dances.

I would like to remark that the reconstruction presented here does not rule out the need to attempt further and perhaps different reconstructions, and in fact I still continue my research and planning of new prototypes.  The organ was finished in June 2014 and since then I have been using it to play with the ensemble Magister Petrus (directed by Dr. Mauricio Molina) which specialises in 12th and 13th century repertories, and to teach portative organ in the various courses I give, such as the International Course on Medieval Music Performance (12th – 13th c.) in Besalú (Spain). The instrument is the first (and so far the only) reconstruction in the world of a 13th century portative organ – a step forward to the reconstruction of the musical past.

For those interested in more specific details – with musicological references that might be of interest to those specialising in medieval music – about this organ and other earlier medieval organs (11th to 13th c.), please stay tuned for forthcoming articles in specialised journals!

Go back to part I of this article here

Are you thinking to build a portative organ?

This website is probably the only place where you will find detailed and specialized information about early portative organ building. Accurate, rigorous, for free. When using this information or variations of it, remember where you found it. Thanking – mentioning – where and from who you obtained information will show you are a virtuous and grateful person.

Also beware that contents of this website are protected by copyright, as it is the non-published research about this portative organ. 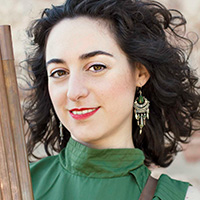 Performer of medieval and Renaissance keyboards, pedagogue, musicologist. Passionate about communication and obsessed with the question: what is medieval music to us?

Buy me a coffee

PreviousPrevious post:13th Century Portative Organ Reconstruction (Part I)
NextNext post:The flores of Flos vernalis: Robertsbridge Codex, Lichtenthal Codex, and the creation of intabulation in the 14th century
This website uses cookies so that you have the best user experience. We use our own and third party cookies to analyze users' browsing and improve our services. If you continue browsing, you are consenting to its use. Read More. Close
Privacy & Cookies Policy